Toms Six’s sequel to his self-penned 2009 original is very different in tone and look to its predecessor.  This isn’t a director attempting to milk a franchise and Six deserves credit for patching together a work which is clearly distinguishable in style and substance.

Whilst the original film used the mad-scientist approach, here the focus is on retarded and lonely  man-child Martin (Laurence Harvey) who is obsessed with the first film – watching it almost on loop from his desk in an under-ground parking garage. Martin then gleefully sets about to recreate his own human centipede.

In The Human Centipede (2009),  the film is primarily shot from the point of view of the victims  – it is essentially a movie about a group of people trapped in a house of horrors and little more.  In this film,  it is the reverse. Everything is from the perspective of Martin –  he is the film’s protagonist and lead. 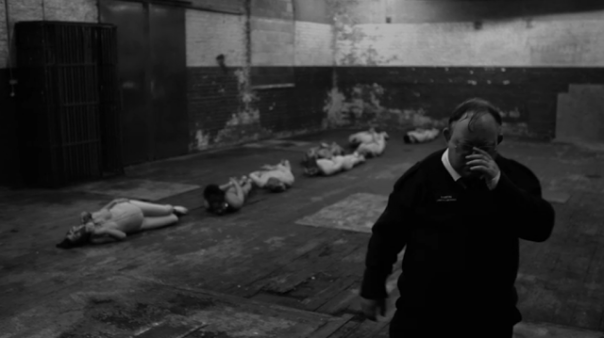 The questions posed by Six are directed at critics of the original; what indeed if people who watch horror movies do copy them>? what if they are incited to act out their own carnal perversions? Six doesn’t really do much else than answer these questions in the only way he can – by utilising the ideas as a basis for his sequel.

The choice of black and white photography over the medicinal dyes of the first movie conjures the seedy London look particularly well. It also means that the gore shots are less visceral than one might expect.  In fact, Six’s real achievement is making the audience appalled not by the grisly surgery on-screen but by the implied sexual gratification on Laurence Harvey’s piggy face.  The lack of dialogue adds to the pseudo-documentary feel, but oddly it’s a film which just doesn’t really require a script.

For me, this was a better movie than I anticipated, and certainly an improvement on the somewhat turgid original. Not for everyone but certainly not devoid of merit, Harvey may be destined to be a minor cult star with his performance.

Posted on August 12, 2014, in Uncategorized. Bookmark the permalink. Leave a comment.