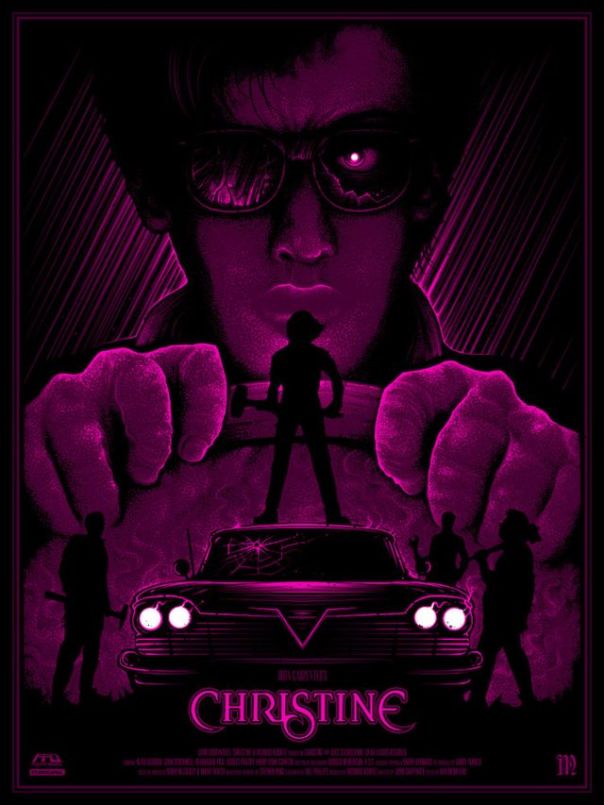 Arnie (Keith Gordon) is a high-school geek who becomes transfixed with an old car – ‘Christine’ – he purchases and does up. Arnie soon begins to change, developing a more uncaring and aggressive personality. When Arnie’s enemies begin to die, with ‘Christine’ seemingly involved, his best friend Dennis (John Stockwell) and girlfriend (Alexndra Paul) set out to help him and destroy his love for ‘Christine’.

Adapted from Stephen King’s story of a killer car, you may be fooled into thinking this is mere low-brow entertainment better suited to an episode of The Twilight Zone. In truth, this is one of Carpenter’s best movies.  The cult director’s hallmarks are all here – minimalist lighting, a throbbing synthesized score, outcast characters and some ‘big’ scenes.

Many of Carpenter’s films deal with siege-mentalities. His characters are often trapped, usually physically, in a confined area subject to attack.  Think the police station in ASSAULT ON PRECINCT 13 (1976), the outpost in THE THING (1982) or the church in PRINCE OF DARKNESS (1987). Here, once again we have that same siege mentality except this time it’s Arnie and ‘Christine’ who are under-siege from everyone else in the movie. The world and his wife are out to get Arnie and ‘Christine’, or at least that’s how it looks from the perception of the film’s lead character.

The performances from the cast are universally strong. Aside from our leads, who are all on top-form, Harry Dean Stanton and Roberts Blossom have outstanding bit-parts as a curious cop and the seller of ‘Christine’ respectively. It’s this quirky character development which means, quickly into the running time, you forget you’re watching a rather silly movie about a demonic car.

The script is informal, loose and urban – which matches the photography of the picture. The conversations between Gordon’s Arnie and Stockwell’s Dennis are heart-felt, particularly in the film’s penultimate scenes where Stockwell sobs as he realises the depths to which Arnie has sunk because of ‘Christine’. In fact, much of the movie seems to be about the disintegrating relationship between Arnie, his parents and his best-friend; not because of some teenage girl but because of Arnie’s deadly obsession with ‘Christine’. This film could just as easily be termed a love story – the best horror movies often can be – and the inevitable tragedy that comes hand-in-hand with the blind & possessive nature of a teenager’s first love.

As well as the emotional stuff, there’s some choice gutter dialogue between Darnell (played by a gruff Robert Prosky) and Arnie which provides the acid-tongued comic relief that Carpenter loves to flavour his films with (remember the wise-cracking Napoleon Wilson everyone?). 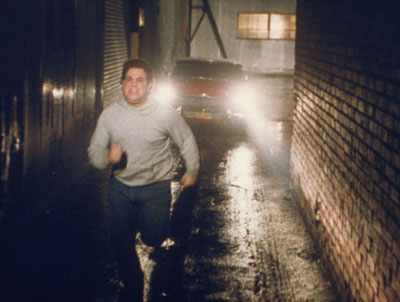 Stand-out sequences include the car transformation scenes – particularly the first one where we see ‘Christine’ repair herself after being beaten to hell-and-back by a bunch of high-school bullies – and the gruelling chase set-pieces. In these, the shadowy cinematography is brilliantly showcased as ‘Christine’’s headlights form grim lanterns that stalk Arnie’s tormentors along desolate highways.  The reductionist and naturally self-penned score from Carpenter is one of his finest and the perfect accompaniment to the elegantly-choreographed chase sequences.  The 50s tunes that creepily play out of ‘Christine’ as she is about to get nasty are a sweet touch indeed. Seek this soundtrack out; it’s well worth a listen.

For all the positives, the film doesn’t quite get the pacing of the story right and it seems that Arnie’s transformation from likeable geek to ‘school bastard’ actually happens much behind the camera.  But, Carpenter’s strength with CHRISTINE is that he plays the story straight – not for laughs – and this is a serious horror movie about aching love and possession.   One of the most under-valued genre movies of the 80s and of Carpenter’s career.

If there’s one shot in horror….

then this is  it.

Of course, the scene comes from John Carpenter’s HALLOWEEN (1978).  For me, this is the image that gripped me as a kid,  forever associated with the feeling of utter terror that comes hand-in-hand with seeing your first really scary movie.  I can remember my guts going all over the shop as I desperately tried to look elsewhere but I couldn’t get away from Carpenter’s cat-and-mouse horror tale unfolding on the screen.  You can’t kill the boogeyman you know…..

Indiana Jones meets The Descent. Everything here is borrowed from better entries in the horror genre.

A young archaeologist and a ragtag group of French kids head beneath the streets of Paris in search of the  “philosopher’s stone”. Whilst in the catacombs under the city they come to believe they may not actually be alone.  As they go deeper, signals suggest they could be approaching the gates of hell itself.

John Erick Dowdle, director of 2010’s DEVIL, returns to ‘Satan-cinema’ with this effort. The physical representation of Hell is really what the movie is about and that’s a brave topic. Our band of plucky explorers literally crawl straight into Hell itself ( in one of the most effective scenes of the whole film). The basic and unoriginal idea is that past sins come back to haunt us – and that’s what happens in Hell,  a place specific to each individual. 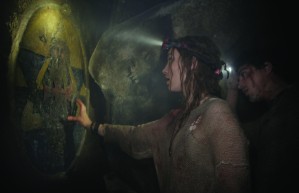 There is also something inevitable about this group of people being pulled together to go into the catacombs. But beyond this,  Dowdle leaves most to audience interpretation.

The film’s introductory scenes garner interest as our female lead (think an idealistic Lara Croft) is nearly crushed by a controlled explosion in a cavern below Iran, whilst we glimpse the image of a hanging man. The screenplay then sets up our Paris trip with much talk of alchemy, centuries-old puzzles and the illusive “elixir of life”; you could just as well be watching Indiana Jones.

Poorly scripted throughout, once we enter the catacombs, the movie regrettably falls back on socking a collage of demonic images to the audience in a kind of unstructured merry-go-round.  What the film never really attains is the dread-soaked atmosphere you think could be round the corner, a feeling for example which elevates films like Fulci’s THE BEYOND (1981)  above others addressing the underworld.

One of the film’s successes is that it manages to make you forget you’re watching a found-footage movie. There are some creepy sequences and disquieting moments, which mostly owe to on-location shooting in the Parisian catacombs.  We do get believable performances from some of the cast, I particularly liked Francois Civil as  the adventurous but guilt-ridden  Papillon. 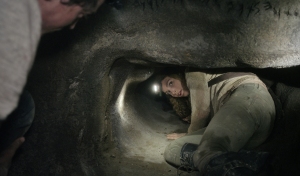 “are you shitting me?”

The cardinal problem here  is that Hell was done better in EVENT HORIZON (1997) and “claustrophic-cave-terror” achieved its pinnacle in THE DESCENT (2005).  So whilst there are intriguing ideas, there isn’t much we haven’t seen before.