Carol Reed directs Graham Greene’s story in a film which is now mostly forgotten, a victim of the duo’s later success in the form of acknowledged classic “The Third Man” (1949).  This is a noir-ish thriller hooked on gorgeous photography, palatable suspense and a heck of a performance from Ralph Richardson as an embassy butler increasingly accused of murder.

Reed tells the story from the viewpoint of Phillipe, the ambassador’s son, but this is no children’s film. There’s a deep coverage of morality and the quandary we can find ourselves in when lies and secrets abound. Phillipe’s coming-of-age through the events of the film is the major plot device but it’s Richardson’s conflicted valet , Baines, who is most magnetic.The script is strong, with a melancholic line delivered superbly by Richardson being so pondrous that it quietened me abruptly: “some lies are just kindess”.

The relationship between Baines and Phillipe is well-handled, and the subject of the film’s title. Yet, the ambiguity over which one of the two is the actual ‘idol’ is inspired. Sonia Dresdel is positively bewitching as a ‘bad-disney’ like nanny character with a heart of steel and a viper-like tongue. Both Phillipe and Baines try desperately to escape from their mini-prison in the embassy to avoid her.

Reed’s technique and style, immortalised to audiences within the reel of The Third Man, is showcased just as well here. The Dutch angles and low camera shots are perfectly suited to the child’s POV, and feel a more natural fit in this film. 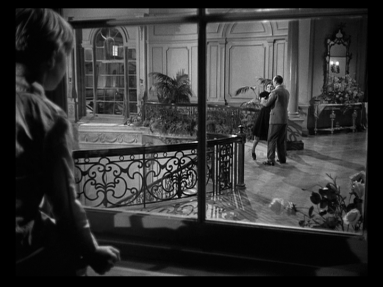 The black and white photography is ravishingly handsome, with two particular scenes standing out from the pack. The first is the ‘hide-and-seek’ sequence, which for me is one of the best set-pieces put on film by any British director.  Phillipe, Baines and Julie (Baines’ love interest) dance amongst the baroque lighting, dynamic editing and swish visuals whilst Mrs Baines haunts every shadow and crevice of the gothic set.

The second, occurring minutes later, are the night-time shots of darkened London Streets as Philipe runs away from the scene of the crime. This culminates in the brilliant shot below.

There are strong parallels to Hitchcock’s work, with Reed building suspense in similar ways.  There’s a forward-look to the themes in “Rear Window” (1954) – and I think Hitchcock surely picked up on some of Reed’s ideas here – and a cracking shot of a pair of feet which is timed so well, it chills you to the bone. That’s without mentioning the ‘paper aeroplane’ schtick , which would nowadays could easily be mistaken as a prime-cut of Hitchcock nirvana.

There’s only one issue with the film and that’s the ending which is so out-of-character with what’s gone before that it feels like the coda to entirely different movie.

Overall, an exemplar of British film-making which dominates your mind. I preferred this piece of claustrophobic drama to the more widely-acclaimed “The Third Man”….

Posted on February 11, 2017, in Uncategorized. Bookmark the permalink. Leave a comment.