The talentless cast of a play about a killer become trapped in a theatre with an escaped mass murderer.

Part tongue-in-cheek euro horror and part classy giallo, Soavi’s film is likely one of the more interesting horror films of the late 1980s.

The premise is straightforward, and the killer’s identity is no mystery. For such reasons it is perhaps easy to assume that this is simply “Halloween” (1978) set in a locked-down theatre…..but that would be very wrong because “Stage Fright” (1987) is not a clone movie at all.

By 80s standards, the film is actually quite gruesome. In particular, one of the faceless cast is drilled straight-through from behind a door and there is a full frontal decapitation. Technically speaking, the sharp camerawork is charmingly reminiscent of both Bava and Argento whilst Simon Boswell’s forceful score is a classic example of electronic orchestra utilised to the best effect.

What sticks in your mind is the finale. Our deranged killer assembles his bloodied victims on the soundstage and takes a seat amongst them amidst a hail of falling feathers. We see this from the POV of the ‘last-girl-standing’ who is cowering in the wings of the theatre. The killer is a little more interesting that you may expect; he plays games with our victims and dons an owl mask – a surprisingly creepy appearance I can tell you. 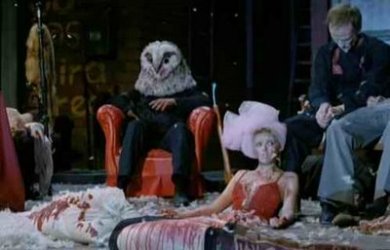 Personally, I’d select the ‘stand-out’ scene as the one where the killer bludgeons a young actress on stage in front of the entire drama troupe – initially they think he is the real actor but realise too late that he is indeed the escaped-murderer they think they have locked outside the theatre, as the virginal actress’s guts spill all over the wooden stage.

The final shot is a quirky take on the immortal slasher anti-hero whereas the opening act is pure tomfoolery with the audience’s sense of reality.

In one line, this is a gracefully choreographed and imaginative eulogy to the slasher genre. One of my favourite horror movies of the period.

NB: Be warned the dubbing is a bit below-par in this one folks.

A woman unwittingly releases the murderous spirit of her mother’s lover by shattering the mirror which witnessed his murder 20 years ago.

“The Boogey Man” (1980) is a relatively unremarkable member of the list of  ‘video nasties’ compiled by the UK Director of Public Prosecutions in the early 1980s.  Ulli Lommel’s shoots this supernatural slasher with atmospheric charm, but its failings are still too many to warrant a glowing reference.

The main positives are the well-executed cinematography and the inventive death sequences. A memorable, if once again unoriginal, musical score adds to the general feel of unease. For me, this uneasy  fervour which pervades much of the film is Lommel’s greatest achievement. I would go further and suggest that the spectral and uncanny demeanour of much of this film is nothing short of artistic.

I also like the premise of the film. The idea of a mirror retaining what it has seen over the years is an interesting one. There is a key difference between the ‘boogey man’ himself and other slashers. This is a supernatural film, more than a ‘dead-teenager’ movie – our slasher is never really seen (at least not after he is murdered in the first reel), he is a malevolent force that can possess individuals and wield pointy objects to key anatomical organs. In essence, you cannot kill him, because you cannot actually see him. In this way, the ‘boogey man’ of Lommel’s world is not a simple imposter for either Michael Myers or Jason.

Nevertheless, the film embezzles rather than borrows from genre milestones such as “The Exorcist” (1973), “Halloween” (1978) and “The Amityville Horror” (1979).  Indeed, the opening is essentially a carbon-copy of Carpenter’s first 5 minutes of “Halloween” (1978) –killer’s POV, kitchen knife wrenched high and all.

Regrettably, thoroughly incomprehensible actions – even by 80s horror movie standards – from our cast are difficult to swallow.  Moreover, the lamentable script could have done with a major rethink. Performances wise, everyone is reasonable although Suzanna Love does give a good turn as a woman haunted by the ghost of her mother’s sadistic dead lover. Grizzled horror veteran John Carradine makes a cameo appearance as a sceptical psychiatrist.

This isn’t a bad movie by the standards of the time, and it looks in places quite gorgeous really, but you won’t be bowled over by it. It remains audibly creepy, even after all these years, and so has to be doing something right. As a result, I have somewhat of a wanton affection for it.